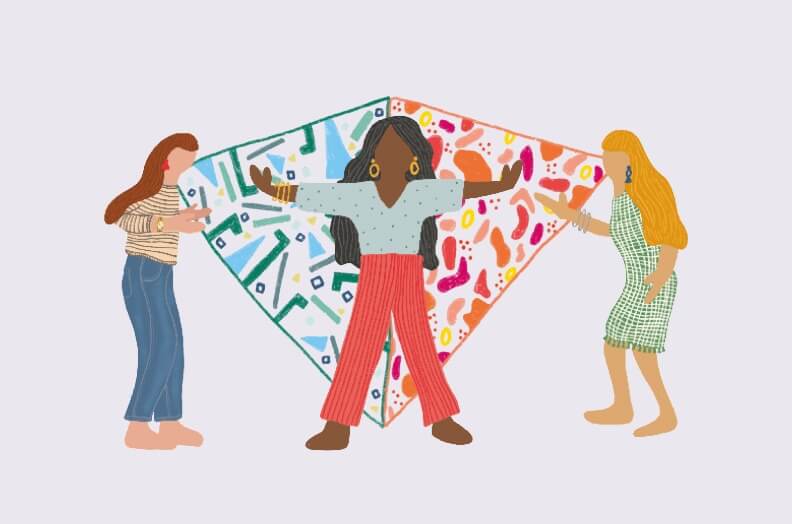 Being part of a group of close-knit friends is great fun… until a couple of your mates fall out and you’re stuck in the middle of their squabbling. When two people you care about argue, it can put you in a difficult situation and place an enormous amount of pressure on you. But there are ways for you to deal with it to ensure you remain friends with both, avoid stressful situations and, hopefully, help them make up and move on.

If your friends have fallen out, it doesn’t mean they have to split up with you, too. Their conflict shouldn’t affect your relationship with them, so remind everyone that you’re there for both of them and this won’t change whatever happens. If they’re good friends, they’ll respect you for staying loyal to both of them.

During fall outs, insecure friends can sometimes react selfishly and may even demand you only remain friends with them. If they do this, they’ll be putting you in a difficult situation. A good friend won’t try to emotionally blackmail you or intimidate you to be disloyal to anyone else.

You might not agree with their opinions, but take time to listen if they want to talk about the fall out.
It would be easy to say you don’t want to hear it and wish to stay out of the debate, but for some, talking is their way to move forward and release pent-up emotions. If they ask your opinion, don’t start being mean about the other person or agree with any negative comments. It’ll end badly for you when they make up. Instead, try to find a way to help them resolve the issue, but insist you aren’t there to take sides.

While it may be tempting to try to get them to make up straight away, respect that they may not be ready for that even though it would make your life easier. Avoid forcing them to talk to each other or having to spend time together if they need time and space to fully process what’s happened. Sometimes they may just need breathing room to realise their mistakes and hopefully they’ll be able to reconcile themselves without your input.

5. Don’t be the messenger

Avoid stressful situations that may be caused by agreeing to pass messages between the two. You’ll be the one who ends up caught in the arguments and being dragged into their disputes – and probably receive criticism yourself if the message is misunderstood. If you’re asked to take on the role of a go-between, suggest they find a way to communicate with each other directly or offer to be a mediator between them.

If you think it might work, and it’s the right time, encourage them to make up. Ensure you have a good understanding of what’s happened before getting involved. Often problems are caused by misunderstandings – can you point this out? Is it a petty argument that quickly got out of hand? Sometimes, people need reminding that life is too short for silly arguments and it may make them question whether it’s worth falling out for.

Arrange for your friends to meet with you at a neutral place. Acting as the mediator in the middle, try to make them see you’re there to help everyone to move forward because you want them to be friends. Suggest guidelines about arguing, raising voices, respecting each other and give each person time to talk. See if you can work out a way for them to forgive, apologise and move on. If you can’t, at least you tried.

Sometimes it may be that you disagree with a friend’s comments or behaviour. Depending on your relationship, you may be able to make them realise what they’ve done and encourage them to apologise. To avoid conflict, when you speak to them, focus on their behaviour and what they’ve done rather than getting personal and criticising them or being judgmental. Communicating in a calm, polite and kind way will hopefully inspire them to do the same.

It’s hard to be patient when it’s a tense situation, but accept they may not make up quickly. If you struggle with the mediation, seek advice from other friends or speak to both parties to see what they want to happen. If they’re true friends, they will get over any small arguments with or without your help. Friendships and friendship groups change many times throughout life so it could be their relationship wasn’t meant to be. What’s most important is you surround yourself with healthy, positive people who realise you’re a really good friend.